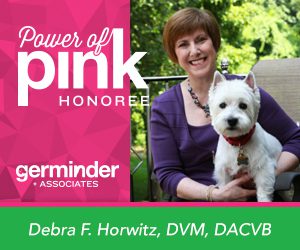 Solving pet behavior problems is her life’s work. For that and her leadership in the profession, Debra F. Horwitz, DVM, DACVB, a veterinary behavior consultant has been named the first Germinder20 Power of Pink Honoree. Horwitz will also appear for special signings of her latest book, Blackwell’s Five-Minute Veterinary Consult Clinical Companion: Canine and Feline Behavior 2nd edition, and at the celebration of Germinder’s 20th Anniversary at the company’s affiliated Goodnewsforpets™ Booth 3342, VMX 2018, Feb. 3-7, 2018. #Germinder20 #PowerofPinkHonoree

In accepting her honor, Horwitz said,

“Since I was a young child I wanted to be a veterinarian. I feel incredibly lucky to have been able to make that happen and I have loved every minute. It is my dream job and I would not change a thing. Thank you to Germinder + Associates for this award, and for all the people along the way that made my career possible.”

Debra F. Horwitz, DVM, DACVB, is a frequent lecturer, author, media spokesperson and past president and former public relations chair of the American College of Veterinary Behaviorists (ACVB). She and Germinder worked together on the Keep the L.O.V.E. Alive Tour sponsored by Ceva Animal Health and the American College of Veterinary Behaviorists (ACVB). Horwitz also spearheaded an ACVB column on Goodnewsforpets featuring ACVB behaviorist from an ACVB book she co-edited, Decoding Your Dog.

“Solving pet behavior issues is such an important aspect of veterinary medicine and we are thrilled Dr. Horwitz is our first honoree,” said Lea-Ann Germinder, APR, Fellow PRSA, President and Founder of Germinder + Associates. “Her ultimate goal has always been to help the public create a safe, happy and loving relationship with their pets through a better understanding of dogs and cats and how they see the world.”

“Her Story is a leadership success story. She is a fantastic collaborator, a consummate professional and cares deeply about both the veterinary profession and educating the public,” Germinder said.

In honor of Dr. Horwitz’s selection, a donation from a special 20th Anniversary Fund will be made to the Humane Society of Missouri. Giving back has been a hallmark of Germinder + Associates since its founding in 1998. Such support continues with the Anniversary Fund. Donations have already been given to the Weill-Cornell Breast Center and the Clara Goy Foundation with several pet-related organizations to benefit from the fund.

The Power of Pink: A Personal Story was announced in January 2018 as part of the celebration of Germinder’s 20th Anniversary Year. The women’s storytelling initiative not only highlights the founder’s survivorship of breast cancer and her business story, but also shines a spotlight on 20 leaders whose stories have touched and inspired Germinder.

Germinder + Associates was launched in 1998 and provides best in class communications services in the $69 billion pet and vet sectors. The wholly woman-owned company was originally founded by Lea-Ann Germinder, APR, Fellow PRSA in Kansas City and now has offices in New York City and Kansas City. The company has created category-building iconic campaigns; turnkey services, connects and consults with executives in both established companies and organizations interested in entering the vet and pet industries in the U.S.

Goodnewsforpets was launched in 2000 and is a Germinder-owned digital publishing platform that combines an award-winning website and social media channels to curate news of interest and importance to pet parents, veterinary professionals and the pet industry. Advertising, unsponsored and sponsored content distribution are available.

GNFP Digital™ was launched in 2017 and provides a wide range of services based on Germinder and Goodnewsforpets’ expertise. The custom digital content development services and distribution services are offered for both national brands and smaller organizations.